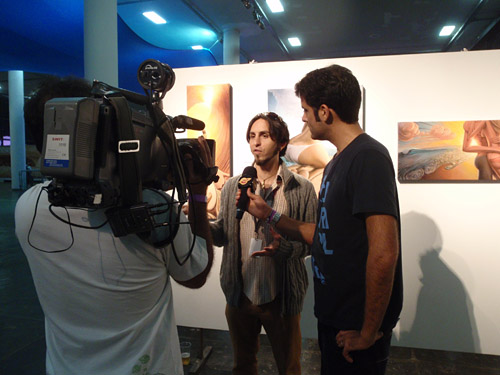 Interview with Channel Woohoo (The Brazilian equivalent of FuelTV)

I recently returned to the states after having the honor of being invited back to Brazil to showcase my surfing artwork at the prestigious FestivAlma 2010. My last tour through Brazil in 2007 was one of the best career experiences I’ve ever had and this time around was another one I’ll always cherish.

I was pretty pumped when I was told who my tour-mates would be.  It was an outstanding line up on this tour. Included were pro-Surfer and Musician Rob Machado with his musical-group, The Melali Band, the event’s musical headliner was The John Butler Trio and also along for the tour was legendary big wave surfing pioneer, Greg Knoll. Also performing on stage were Brazilian bands like Hurtmold and Falcão e os Loucomotivos to name a couple. I was the only American artist on tour, but there was no shortage of talent with local Artists like Joao Vianey, Fernanda O’Connel and Tom Veiga and a few of others.

Upon my arrival to Sao Paulo, I was warmly welcomed by my dear friends from Alma Surf Magazine. We exchanged hugs,smiles and stories and shared some laughs together like old times.  The first couple days in Sao Paulo were quiet, it was before the hectic atmosphere of the tour began and I had a chance to explore the city and enjoy the down time.

It took some googling to find some vegan friendly restaurants, but by the 2nd day, I was pleasantly surprised to find some fantastic places within walking distance from my hotel.  The American dollar is almost 2 to 1 the Brazilian R$, so eating like a king was the equivalent of about $10…Sweet!!  Speaking of veggie food, a month ago or so, I did a full page interview with Brazils’ Vegetarianos Magazine. So I was so pleased to have been able to have lunch and hang out with the magazine’s publisher and my friend Marco Clivati.(pictured in thumbnails at the bottom of this page) 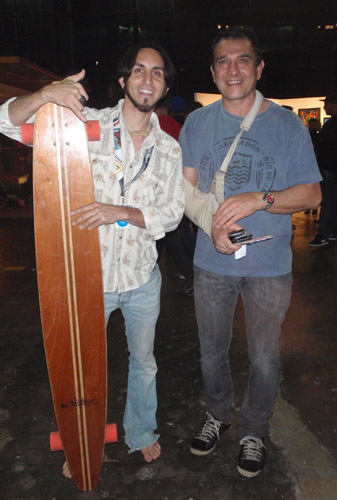 My good friend Romeu Andreatta, (seen above on right) the publisher of Alma Surf Magazine invited me, Dave and Tony from John Butler Trio out to a private MMA fight at a very upscale Sao Paulo venue.  It was a total dude-night…Fighters carried off in stretchers, hot ring girls, beer and loud music. 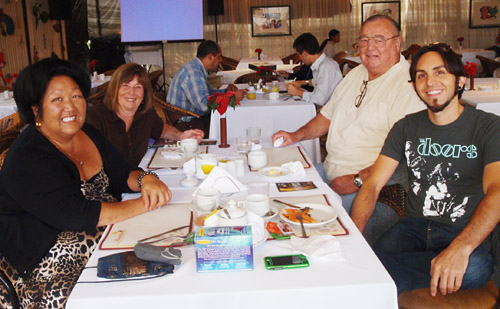 The phone rings at 5am…well, maybe 8ish, but I swear it felt like 5.  Anyway, my friend Keiko calls and says “Good morning Jay…Do you want to have breakfast with Greg Knoll and his wife Laura?”. It’s not everyday I get wake up calls like that…I was up dressed and drinking coffee in about two minutes.  Greg’s just as spunky in person as the videos I’ve seen of him. When we asked him why he left Southern California to live in Oregon, he said, “There’s too many weenies down there!” …haha…Classic!

I was in town during the big Soccer World Cup game between Brazil and the Netherlands .Well, I think it was the Netherlands at least. I don’t watch team sports, but I sure did see the fireworks going off, witness the shops all shutdown and hear the screams and cheers throughout the streets.  It was complete pandemonium and nothing like I’ve experienced here in America.  It’s really refreshing to see how Brazilians take ‘real life’ (whatever that is) a little less serious than we typically do.

FestivAlma was set up almost overnight. The art, the stage, the skate park, vendors all just seemingly appeared. I had 9 of my paintings on display in a very prominent area and I got a lot of well appreciated attention. As I was doing handfuls of TV interviews, I couldn’t help but ponder how surreal it is voyaging to another hemisphere of the globe and having people know who I am and be inspired by my art.  Hopefully I sounded quasi-interesting after the translations. Most Brazilians are very educated and multi-lingual;It’s truly remarkable how effective a means of communication art,music and a smile can be.

Melali Band played the first night. I had seen Rob and Jon Swift perform a couple times last year when we met up in Cocoa Beach,FL and Manasquan, NJ. But this time around, they added some new musicians which really stepped up their show to a new level.   Totally cool and fun guys to hang with too.

I gotta say, John Butler and his crew are some of the most down to Earth guys around. It was so fun hanging out with them and backstage always had an open and friendly vibe, with no egos whatsoever. This was my first time seeing them perform and by the time they played, I knew them more as friends than musicians which is a nice way to start any friendship.  That said, they totally kicked ass on stage.  So much energy, masterful musicians at their craft, 110% all the way! So impressed and can’t wait to see them play again. The crowd went total ape-shit and deservingly so. 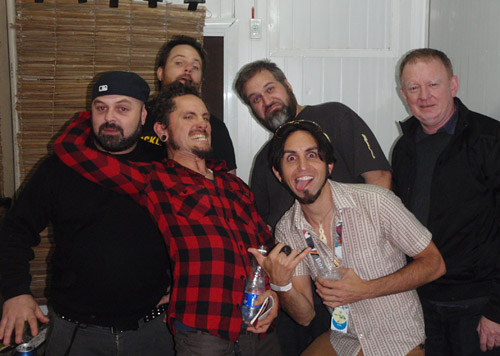 After their show we went to the Hurley after party and at the end of the night after a few too many drinks we all were scavenging for rides home at 3:45 in the morning.  Four of us ended up squished in the back of a car and John and I took this pic (below). Oh and for the record, the wind was blowing in the window, I wasn’t rockin’ a new hair-do. 😉 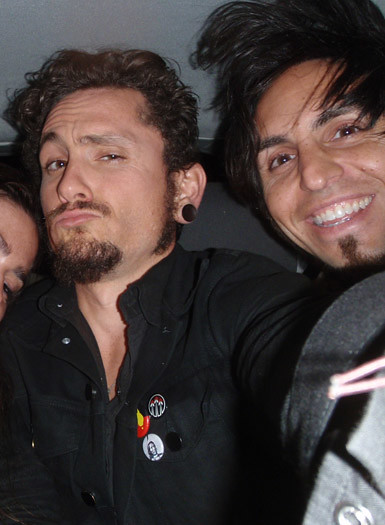 The night after this, I hung out with Rob and his band after the show.  We drank beers til late and grabbed some grub at a diner. I volunteered to sit in the hatchback. It’s funny the things we do after a couple Skol Beers set in. We definitely saved some fuel costs on this tour.  (see below) 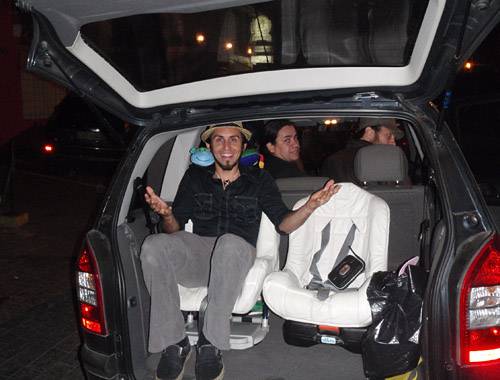 Pretty comfortable for a child seat! Having a small butt comes in handy. 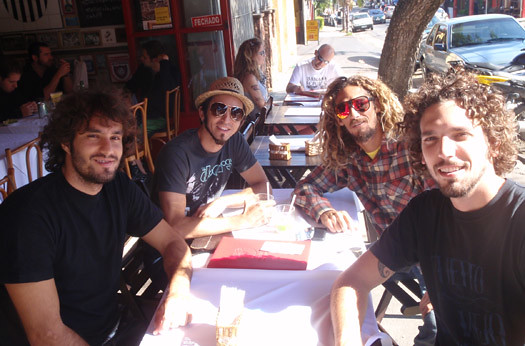 On the last day of my Brazil tour things were way more relaxed.  Everyone had left town except for the Alma Surf crew, Rob Machado and Greg and I.  Our friend Felipe from AlmaSurf took Rob and I to his apartment to hang for a bit with him and his roommate. We got our drink on together and had some good conversations about art,the environment, music and surfing…Yeah, cliché topics, I know…haha. 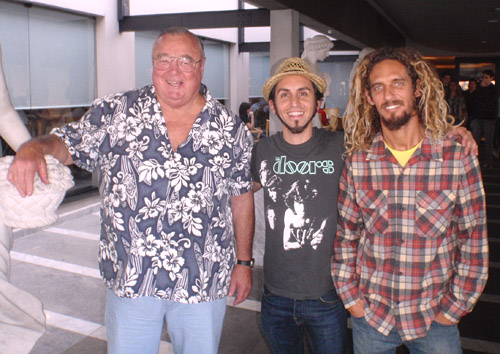 The Alma Surf staff took us for a nice dinner together before we all parted ways. I was definitely the only vegan in this particular Brazilian BBQ buffet, that’s for sure. 🙂 As we clinked glasses and shared some yummy grub and stories, I couldn’t help but take a note of the company I was spending time with and feel a sense of honor and accomplishment. 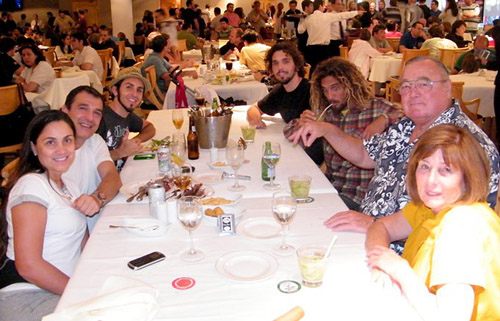 Over the past several years I have made a lot of extraordinary friends and fans in Brazil. It is truly a marvelous place with alluring weather, warm-hearted and kind people and a thirst for culture.  I would like to sincerely thank the entire Alma Surf Magazine and FestivAlma crew, my tour-mates and the Brazilian people for their support and unwavering hospitality.  I am very exciting to have an opportunity to return to Brazil again soon!