I just got back from the infamous “Surf Expo” in Orlando, Florida, just on time to catch Hurricane Bill’s enormous swells that hit my home town beaches of New Jersey which Pro-Surfing Icon and former World Champion, Andy Irons was surfing on that Sunday. Quite a surreal scene to come home to! 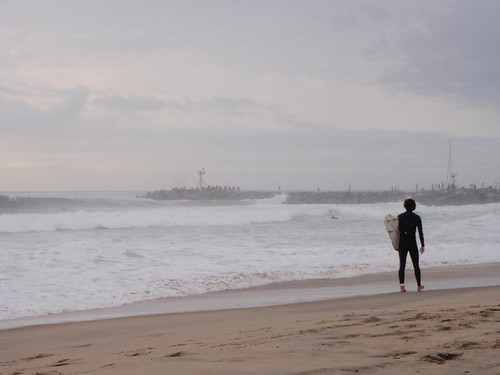 Strangely enough, this was my first time to Surf Expo and I didn’t really know what to expect, but I must report that it was a really great time.  My first day and a half down in Florida I drove from Orlando to Jacksonville to hang out with my buddy Eric Brigmond, who’s the keyboardist for Donavon Frankenreiter‘s band as well as a composer, trumpet player, gigging musician and all around board riding shredder.

Him and his awesome new wife Cat are some of the grooviest people around.  They warmly welcomed me into their beautiful home and made me feel quite comfortably at home.  I can’t wait to reciprocate the kindness whenever they decide to swing on up here.

While in Jacksonville, Cat and Eric took me to “Poles”, one of the local breaks.  It was pre-hurricane Bill, but the normal Floridian East Coast Dribble gave us a few longboardable rides and we had a blast being goofballs out in the water.

After we paddled back in, Eric and I decided to go skating. Eric took me to some insane cement skateparks which we rode for a while, until we just about melted and had no sweat left to drip.

On the way home we found out that surf legend , Mark “Occy” Occhilupo was in town for the “Still Filthy” film premier (which was absolutely SICK!! Go see it!) and Eric knew him from his tour in Tahiti with Donavon, so we stopped by and saw him and our friend Enich Harris from Billabong.  I have been a fan of Occy since I was a teenager, so you can imagine how stoked I was. 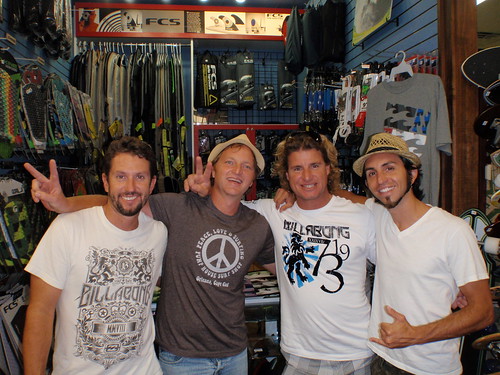 Later that night we went down towards the beach and I got to see Eric and our friend Craig Barnette (Drummer for Donavon’s band) rock out with their friend Billy at a local pub, quite a contrast to playing to stadiums and arena’s  but super cool to see their “other life” as musicians. 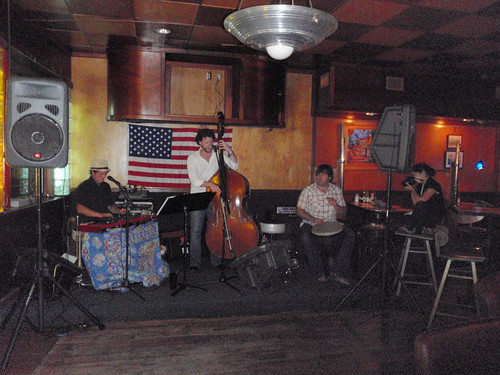 So I finally got to Expo the next day and happily met up with my friends from Surfrider Foundation and SurfAid International.  Both are some of my favorite charitable organizations which I donate to frequently. I was honored when they both asked me to donate and show my Surf Art at their booths of such a prestigious show.  SurfAid also surprised me by having one of my Art Surfboard Models their which I did with 9:Fish Surfboards and SurfAid. 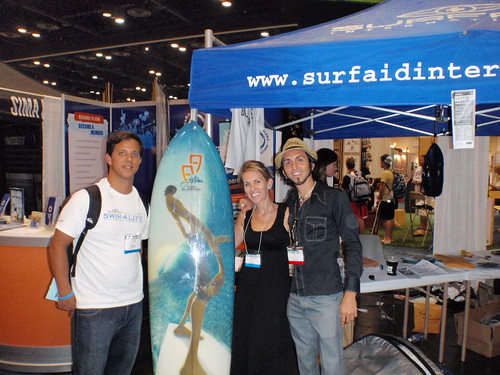 Javier Guerrero and Elizabeth Ritter from SurfAid with Jay Alders

I was really glad to see our friends Maria and Drew Brophy at the show.  They drove from San Clemente, CA with their son Dylan in this amazing van that Drew painted with his trademark Surf Art.  That vehicle along with his art display made quite an impression on the crowds!  Drew and Maria also gave a few seminars which were outstanding and I was so appreciative when they used me and my artwork as examples during their slide show! 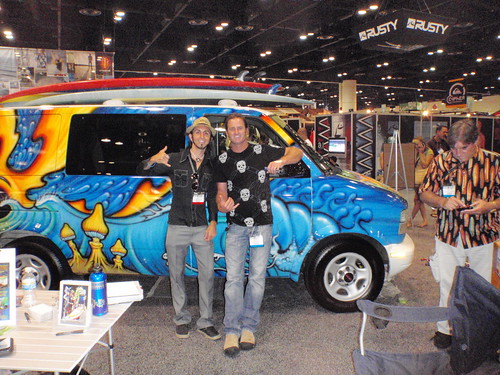 Posing with Drew Brophy and his Surf Art van 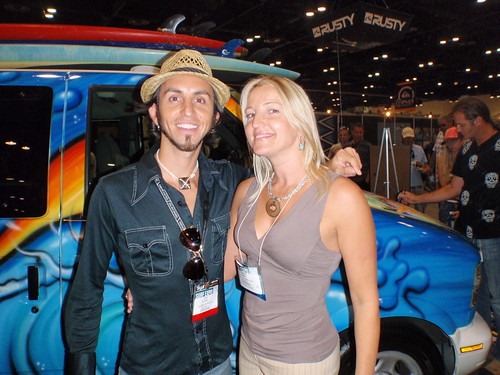 Jay with the marketing queen herself, Maria Brophy (follow her at Twitter.com/MariaBrophy

While at the Expo, I also had the pleasure of seeing my friend Bob Mignogna, who is an true legend in the Surf Industry.  Bob ran Surfing Magazine for 30 years, launched a slew of other Surf Magazines, his group bought Surfer Magazine, Skateboarder,Snowboarder and others. He helped launch The Surf Industry Manufacturer’s Association, he’s an Advisory Board member of Surfrider, a publisher, mergers and acquisition consultant…(need I go on? 🙂

Anyway, Bob is one of the nicest guys around and him and I became friends while on tour together in Brazil in 2007 and as luck would have it, his 60th birthday was during the Expo.  Bob stoked me out me by inviting me to his birthday dinner to which I had such a great time.  With us were Bob’s friends: Xcel Wetsuits founder and fellow Jersey guy,Ed D’Ascoli, Tiffany Montgomery (Founder/Editor of Shop-Eat-Surf.com) and Dustin Odbert (Ambission Clothing).  During dinner Paul Naudé, (President of Billabong-USA and former South African surfing champion & 3rd place Pipe Masters Champ in 1976) also joined us which was a great surprise, especially since I just did some shirts for Billabong’s upcoming T-Shirt line. 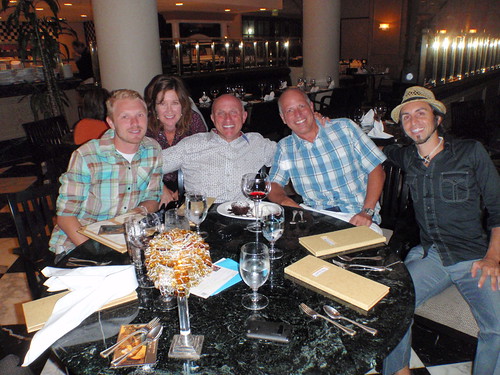 On the last day of the show I had the privilege of meeting up with the great crew from the Kidney Foundation. Some of their members are Surfing Hall of Fame members Rich Salick and Phil Salick to whom I donated a huge amount of Surf Art Prints to help raise money for this worthy cause.  They had me sign the prints and took some great photos too.  Whenever my art can help people in need, I am very grateful. 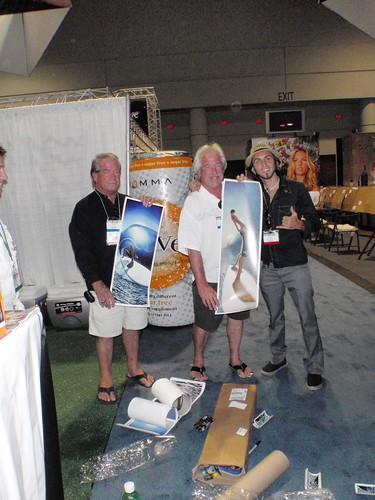 The evening before I flew home, there was a much anticipated Industry party hosted by and to benefit SurfAid International.  It was a beautiful night and I was so happy to see my Surf Art and Surfboard model be raffled and auctioned off to such great people! 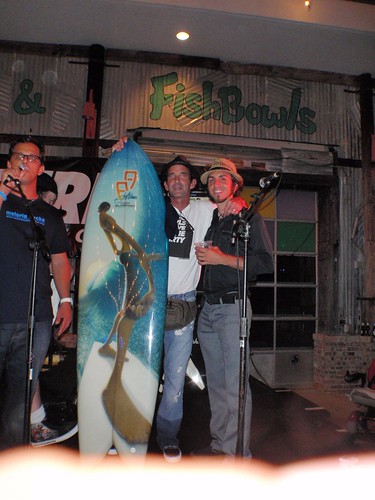 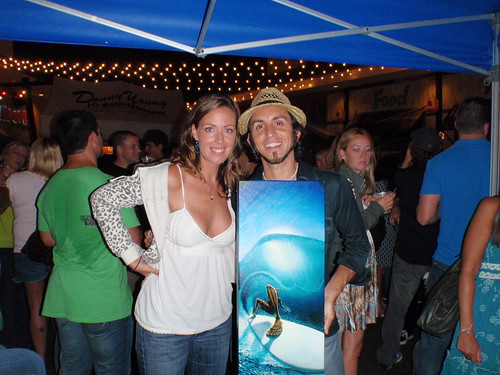 Winner of the print "Right Past the Light"

Thank you to all the great people who made this such a fun and productive time!! It was so nice getting to catch up with some of my local Floridian friends and friends from afar! 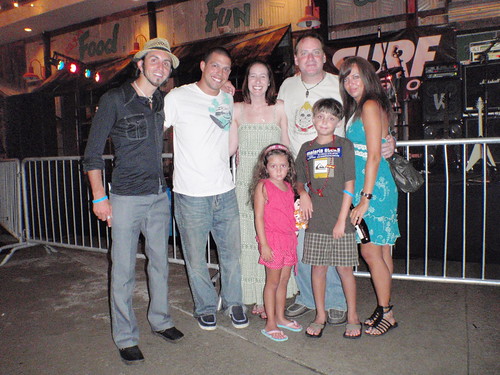 The Murray's and Gomez's at the SurfAid Event! Awesome friends!!

(Below) This is a video including the surfing of Andy Irons, Sam Hammer and others, that was put up covering the swell that was Hurricane Bill at one of my home breaks, Manasquan, NJ. This is what I came home to! Made me proud!